Since the 1960s and 70s, the Oregon and Washington wine industries have boomed, leaving titillated American taste-buds in their wake. The historic area of the Columbia River Gorge has produced such an amazing array of early varietals that it was officially designated the Columbia Gorge American Viticultural Area (AVA) by the federal government in 2004. This designation recognizes the superior fruits of the Columbia Gorge area, and protects the wineries within the AVA from false advertisers. Read More

The unique climate and soil makeup in the Columbia Gorge AVA produces a wonderful growing environment for early varietals, such as Pinot Noir, Pinot Gris, Chardonnay, and Gewürztraminer. Located in the rain shadow of Mount Hood and the rest of the Cascade Volcanic Arch in northern Oregon, the climate remains significantly drier and more temperate than the surrounding area.

The resulting wine have a distinct "Columbia Gorge" structure; the area produces slightly sweeter whites with a sparkling nose that finish in a vivacious burst of flavor, and soft, deep-throated reds. Alongside the more common early-ripening grapes, the Columbia Gorge appellation produces award-winning Cabernets, Zinfandels, Syrahs, and Rieslings. 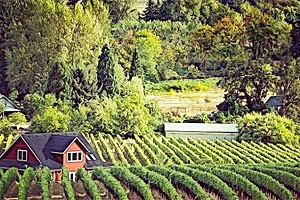